Not sure if this is the right place for this but here goes.

Got a 93 Coupe, had it since new (yes I know long time) the engine finally decided to spring a massive oil leak out the head gasket and was quoted at least $1600 for a workshop to fix it... which lead me finally to step up and got a CJ sedan. 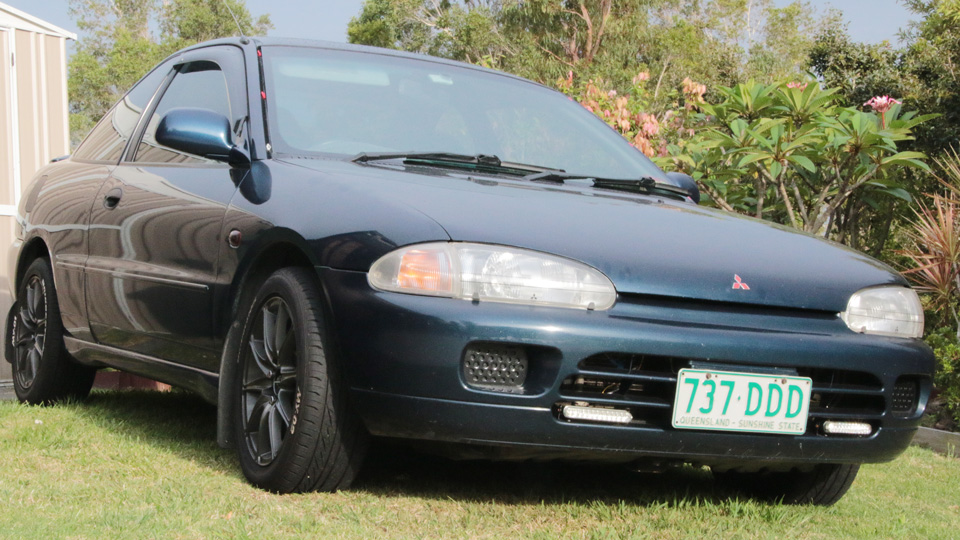 Anyway back to the coupe, wasn't gonna pay that much to fix a car worth about the same. Plus I just happened to have a spare engine out of a Proton M21 sitting at home. It's the dohc 4G93p and will hook right up to my existing GB but will require some mods to the wiring loom and this is part of the reason I started this thread.

The M21 was bought late 2013, minor damage to the front, probably repairable but it also had a rusty roof and boot. The car had around 136k on it and I took the engine out myself, it looked like it had a new radiator the water was clean and it ran good but had no front seat (and no rego) so wasn't able to take it for a test drive. The last year it's been in my garage, out of the weather, I filled it with oil and have been turning it over to keep things lubricated.

Part of the reason I got the CJ was I knew it would take me too long to get the engine in the coupe but now I'm ready to start work and bring the coupe back to life.

First I need to prep the engine with a timing belt and maybe water pump and check gaskets aren't leaking and this is where I need some help. I've checked prices at Repco, about $125 for just the TB about $200 with the kit. How do I know if it needs a TB kit or just the belt?

Any help would be appreciated, I live in the Caloundra area. I plan to do the work at home unless someone has a garage going unused LOL

BTW I have replaced an engine before, many years ago in a 76' Celica, got a twin-cam from a Jap auto supplier, much easier job being a carby motor.

I also plan on replacing the steering rack or getting the existing one fixed for an oil leak, got the one of the M21. Also might replace the front sway bar with the bigger M21 one as the rubbers are worn on the old one. I'll be doing the rear brake swap with disc and a bigger brake boost while the engine is out. Lots of work but I have most of the parts needed, just need bits like the timing belt, water pump (if needed) and clutch kit.
Last edited by Lancer1993 on Tue Aug 04, 2015 4:48 pm, edited 2 times in total.

in most vehicles water pump gets replaced as well as the timing belt in the same service intervals. hence why they are typically packaged together.
on most vehicles you would need to remove the belt to obtain good access to the water pump.
136k kms means they should have done it...

Also not being familiar with your car its hard to give a definitive answer.

But i will finish on the note that cars that sit for a long period of time are generally worse off than high mileage. (corrosion, oxidation, exposure to elements, vandalism, etc.)

Yeah it's probably not ideal but I've done what I can to keep it good, I figure it's a lot easier to do this work before it goes in the car. Its already on a engine stand so I can rotate it and move it about.

Not sure if the water pump was done with the radiator or when the TB was done.

What I need help with is knowing what parts I need, maybe some help getting it in the car and help with the electrics to get it running.

I plan to get this done over the cooler months as the work will most likely be done outside and dictated by what spare cash and time I have.

the difference between a timing belt and a timing kit is just that. the belt is just a belt, the kit is the belt, idler pulley and most cases tensioner pulley, crank shaft oil seal and camshaft oil seals as well as gaskets you may need like waterpump and oil pump, some kits may also have an option of with or without the tensioner.

the kit is better if you have an old engine where you dont know what your up against. no point doing the belt only to find the crank seal leaks oil.

Thanks for someone finally explaining that to me.

So since the engine is on a stand the best thing is to just get in there and see whats what. And ask when ordering what comes with the TB kit. Never know it might actually include the water pump.

But either way it's a lot easier to do the work with the engine on a stand and easy access.

Is there anyone in the Caloundra area that might be able to help when I get the parts together?

My other big hurdle is the wiring, I have the wiring loom from the M21 but was told its just a mater of changing a few connections and maybe the computer under the dash?

Okay after 6 months of sitting in the back yard I'm about to make a move BUT I'm now considering cutting my losses and just doing the head gasket on the CC and selling the car working but mechanically unchanged. I can them sell off the other engine and parts for any budding CC owner.

My question now is how hard is it to replace the head gasket in a 4G93 (compared to the whole engine) and should I do the timing belt/water pump also while it's apart?

I know replacing the engine also means I should do the clutch and things like the timing belt and water pump, plus I'll need an engine hoist which all ads to the cost. Not to mention changing the wiring and ECU which ads to the time. Where as for the head gasket I have the tools and may just need some oil and water to check in the car after the job is done.

UPDATE - so I'm finally gonna rip the head off the old CC to see what is going on, will be starting the work next week.

But first I checked around for some prices for the head gasket kit and wow, at SCA it was about $100, meanwhile at Repco they want 3 times as much and Mitsy wants over $500 for the kit.

Is there any real difference in the end product for a stock 4G93, which I'm fixing to sell off?

Also is there anyone in the Caloundra area willing to lend a hand if/when I need it, should be fine taking it off. Got a place lined up that can check the head to make sure it's not warped. And I've got my trusty Haynes repair manual to help me out.

As before worse case the engine needs ripping out but I have a dohc 4G93 I can use if that happens.

I knew there was something else, thanks.

This engine has seen more than 150k since a rebuild so yes they are probably due.

Why such a big gap in prices for the gaskets?

Can't undo the support bolts for the inlet manifold. Most others are coming off with a little wd40 but these won't.

if there is no plastic you can try heat.
but WD40 or PB Blaster should do the trick. also leverage..

Finally got them off... 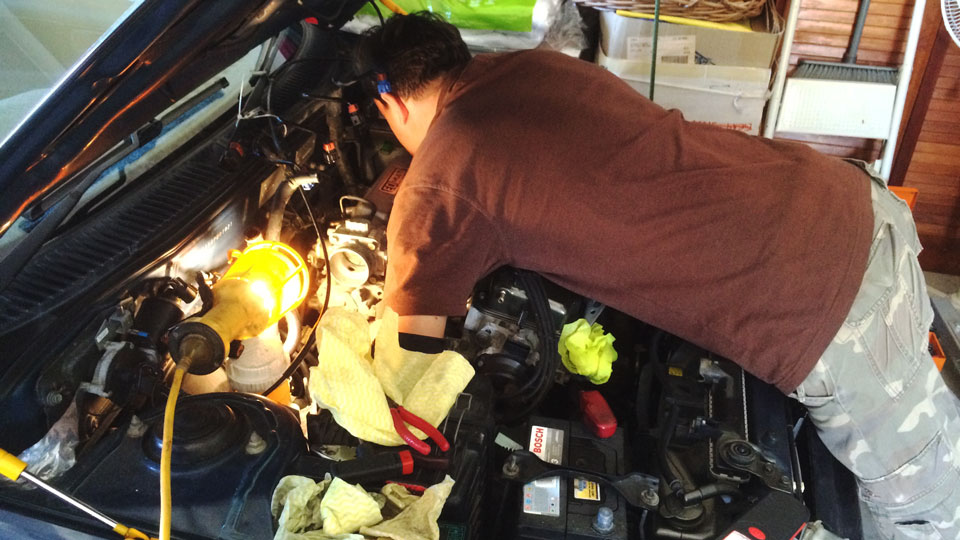 lying on the engine was the only way, after I somehow got the WD40 can down there to get something on the bolts, took some skin off my knuckles along the way. Annoyingly as soon as they came loose they were finger tight to get them off.

My hold up now is the right socket for the head bolts, no one told me I'd need a special socket. I have a 1/2 inch torque wrench to put them back on. I'll get it at a tool shop Monday, tried SCA and Repco they don't stock them.

I've secured the top timing pulley before I took it off, but how do I check it's not moved when I get things back together?

UPDATE - Got the head off, engine bay suddenly has a lot more room!

Annoyingly the first socket I bought at 'Get Tools Direct' didn't have enough reach for 2 of the 8 bolts. Had to spend another $15 on the right one at a different shop, 'Burson Auto Parts' and they gave me a discount. Tried to return the other one and they don't give refunds apparently. Now I could argue with them that under the Australian consumer rules I'm entitled to a refund because the product was not suitable for the job I wanted it for but for the sake on $10.80 I just won't shop there again! They have a crap selection only one socket of the size I needed where as Burson had a better range and were very helpful.

Okay enough bitching, here is were the oil leak was coming from.

It's around the main oil feeder, think it's called that. 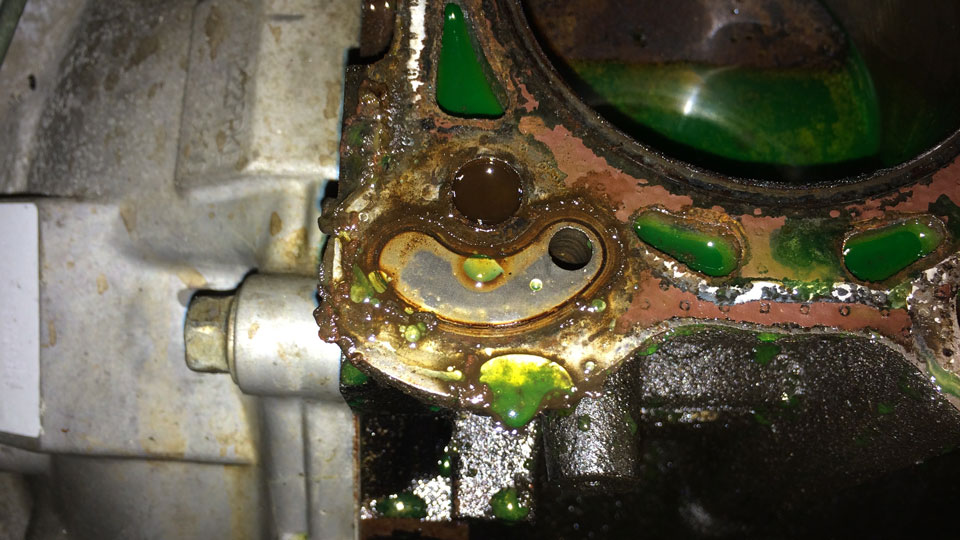 It's hard to see but the gasket, still on the head is damaged. 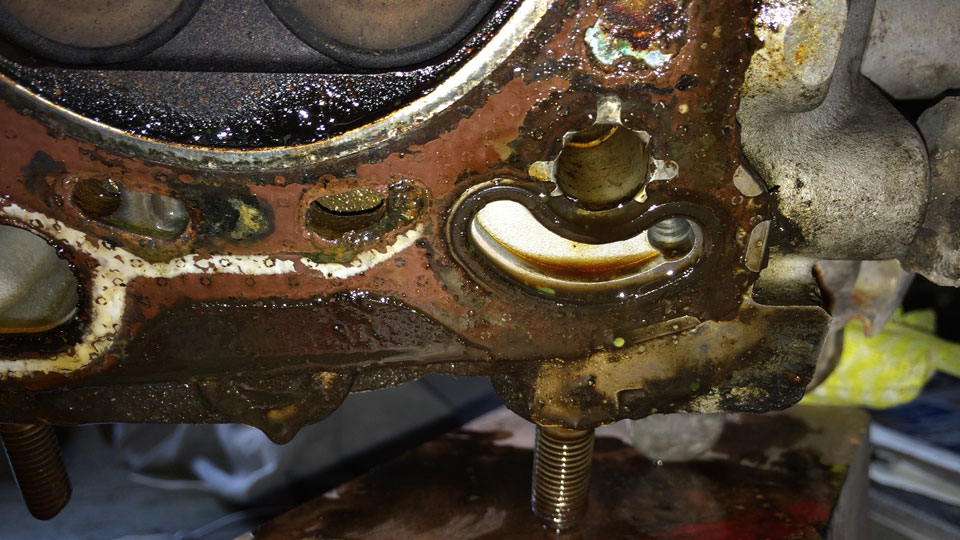 Here is the socket issue, the 2nd one fits much better. 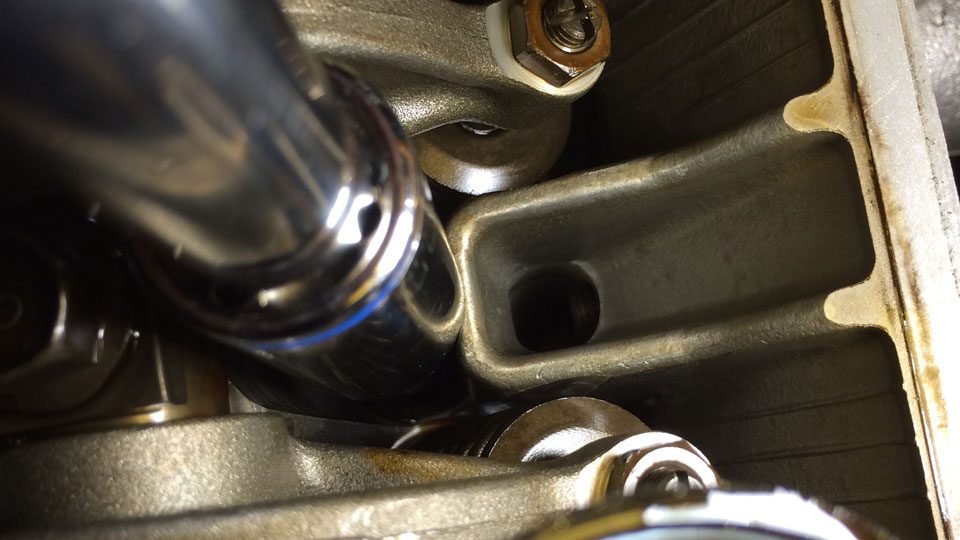 Wasn't told to drop the water in the block but have cleaned up the remains and will be flushing the water and giving the car an oil change once it's up and running again. 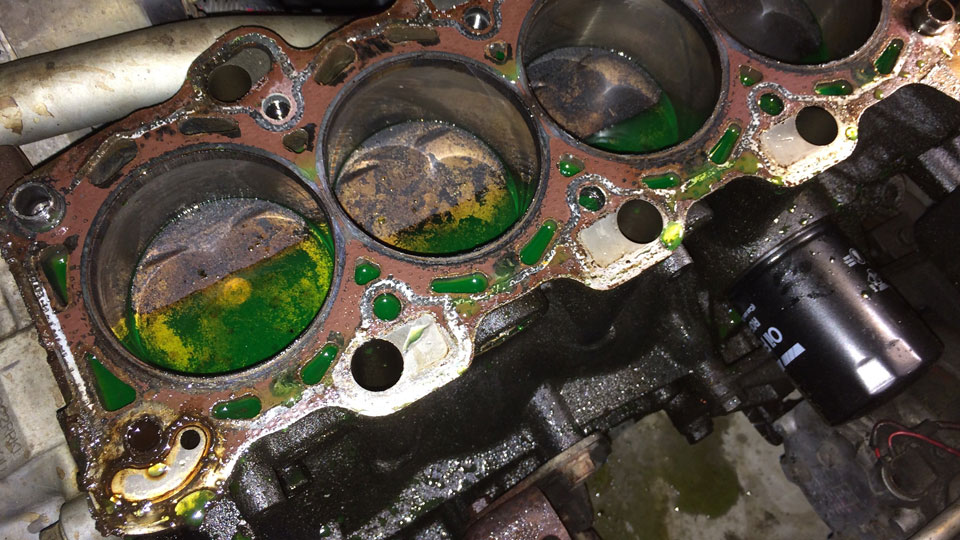 Would have also been nice if the Haynes manual warned about the valves, no damage and it's sitting on some blocks on the bench, not on the valves. 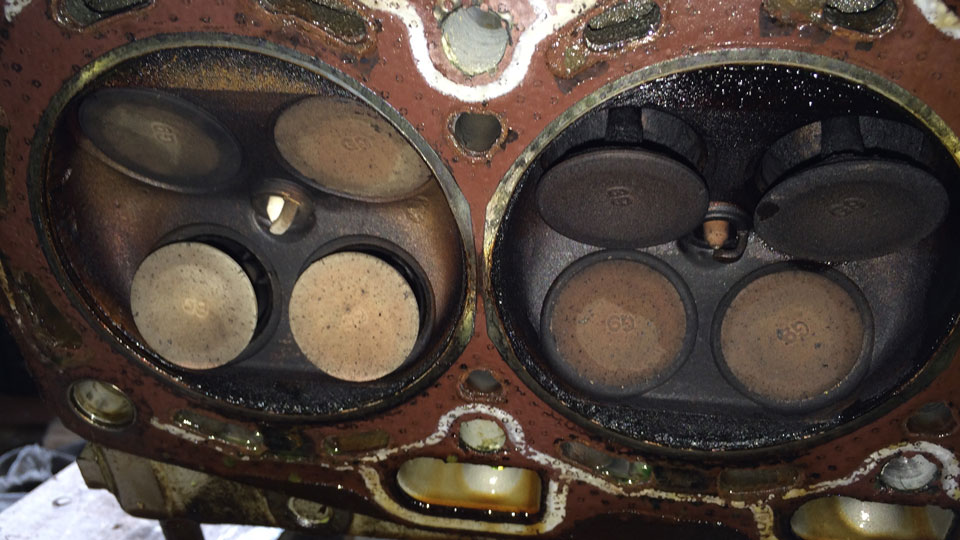 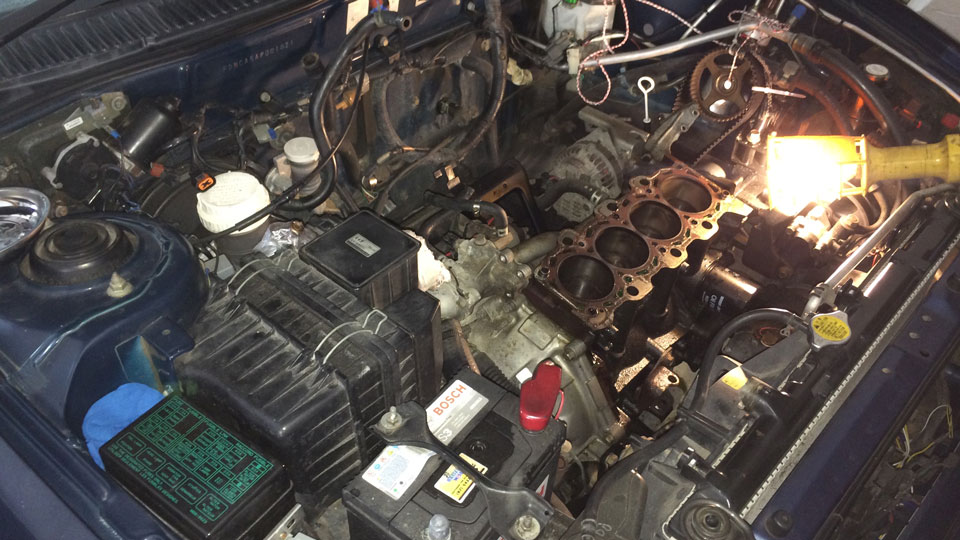 Okay the head is being checked and skimmed, total with gaskets and bolts is about $230. Should pick it up this afternoon.

Next task is to clean the top of the block, best options guys?

Here it is, I've used a rag to get rid of the water from the cylinders.

Okay got the parts back, will start the rebuild over the weekend but I'll need a new radiator before I can fire it up.

- Should I drain the coolant from the block (and fill it up) before I fire it up?
- Ditto for the oil/filter change?
- The wires running to the alternator are exposed, the protective cover thing was brittle and fell off, should I replace it or just use some black tape to cover the wires. The wires look fine but I'll take a closer look when cleaning the block surface for the new gasket.
- Which brings us to the final and probably most important thing, best practice in cleaning the surface for the new gasket?
- Also are there any other things I should do before putting the head back on?

Users browsing this forum: No registered users and 0 guests